This 45,000 sq ft block of retail accommodation was partly re-built in the mid 2000’s and is situated along James Street, one of the busiest pedestrian streets in Bradford City centre, which runs between the Kirkgate shopping centre and the Oastler Centre, housing the city’s main covered market.

At the time of acquisition, the various smaller shop units were in arrears and a large number were vacant. Through a rent collection regime, repair and building upgrade works, together with targeted local marketing, full occupancy was achieved at approximately 20% higher rents within 18 months of the acquisition.

The asset was subsequently split and the Pavilion sold in 2015 with the kiosks being sold in 2016. The main asset was also disposed of in late 2016. 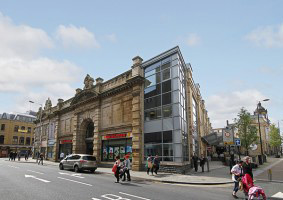