Circus and The Department, Liverpool

Augur Group, with its JV partners, acquired the freehold of the iconic Lewis’s Building and adjoining land holding in central Liverpool, in early 2017.

The scheme has now been incorporated into the Knowledge Quarter and adjoins Liverpool Central Station. In collaboration with Liverpool City Council and Network Rail, the planned development will encompass the 400,000 sqft Grade II listed Lewis’s Building and its retained iconic facade as well as the surrounding land to deliver a new retail and leisure destination in the heart of the city, to be known as ‘Circus’.

As part of the regeneration project, Augur is working alongside Network Rail and Mersey Travel to enable expansion of the station to accommodate growing passenger numbers which reached in excess of 16.5 million in 2016/17 making it one of the busiest rail stations in the UK.

On completion, in addition to Lewis’s, Circus will offer over 255,000 sqft of retail, leisure and residential space. Detailed discussions are already underway with cinema operators and a number of retail and leisure tenants for the wider site.

Included in the acquisition is the 126 room Adagio Hotel, 70,000 sqft of Grade A refurbished office space over four floors with 50% already leased to the NHS, a 26,000 sqft PureGym on the lower ground floor and Liverpool Central Post Office.

Heritage works are nearing completion and enhancements to the exterior of the Lewis’s building and the reception area of the office building have recently been completed. We hope to make a planning application for the major redevelopment scheme adjoining Lewis’s and Central Station during 2019. 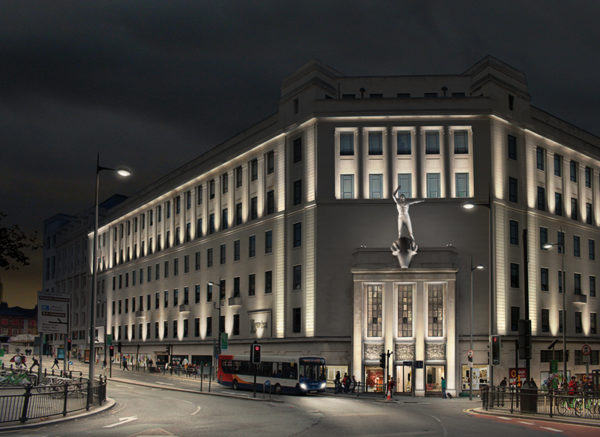